Meryl McMaster's is telling a story that has no ending, perhaps no plot.  She creates evocative costumes and props, many involving birds, and then has photos taken of herself wearing them in the cold and simple palette of a Canadian winter.  They resemble drawings, or maybe movies, or maybe dreams.
Her father is from Red Pheasant First Nation (Plains Cree) and a member of the Siksika First Nation (Blackfoot) and her mother is Euro-Canadian (British and Dutch heritage).  While she explores the cultures that form her with her art, it is not a stretch to see the larger struggle of Canada's history in her work.   Both her parents are artists, and her childhood home was a very creative space to grow up in.  "I was an only child and was often on my own.  I think my current imaginative state reaches back to those moments when I was exploring the world through role playing and creating scenarios."  Her parents had put together a dress-up trunk of old clothes for her, and although she was shy and avoided performing in school theatre, she was attracted to set and costume designs.  Even today she feels vulnerable when she performs for the camera.
"I think the need to understand who you are and where you've come from is normal.  My parents were always telling stories about their families. When I was very young the feeling I got was that the two cultures were inclusive, but when I reached school age the harder questions about my two cultures became evident."
Her performed photographs show us characters who embody attitudes - she calls them temperaments.
About Time's Gravity:  "I came across the tradition of "winter counts'.  Winter counts are drawings, usually made on a hide, that represent a significant thing that occurred in the past year, whether a successful hunt or some sort of battle.  They are very beautiful, simple drawings with a lot of meaning.  I wanted to do my own winter counts, so I made all these journals.  Each journal represents a year that I had been alive.  So I have all these journals representing the story of my life and thoughts, and I'm holding them.  I'm trying to hold onto these memories and I push them together to hold onto them.  Time's Gravity, the title, references how I think about life.  It goes so fast, but it feels like such a weight and it's too much to even think about."
She paints her face, sometimes red, sometimes white, sometimes dotted.

She gazes away from the camera.

"I use winter a lot.  It feels like a magical time.  Everything is frozen; it feels like it's being held in that moment.  It's like sleeping.  There is also the solitude.  When I go on winter walks, I feel like I do a lot more reflection than on my summer wlaks.  Winter is also a hostile time.  It brings an urgency to the images.  I push myself.  I have been in quite a lot of pain in my fingers, toes, and extremities from being out in the cold too long.  But I keep going back to winter.  There's something about that time of year."

There are always gaps and biases in our relatioinship to the past, and it was through my art that I could explore and expose them.  It was a way of creating a conversation with myself as well as with other people.  First of all, it comes from a very personal place.  Most of us have a mixed background, so we're all asking similar self-directed questions.  I've learned that my two different heritages are not always going to completely align, and in order to move forward I have to celebrate those differences." 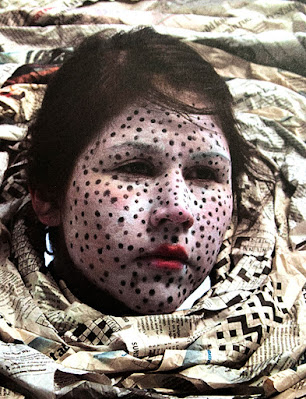 "In my teens I was learning about Canada's difficult past, a past that could have involved my own ancestors.  So if I wanted to be proud of my mothers' family and connected to my European roots, I realized I might be abandoning my Indigenous side.  It was as if I was involved in some kind of betrayal.  I struggled with how to acknowledge and be present in both sides of myself."

Sources for these images and text:

Picturing the Red Line, An Interview with Meryl McmMaster by Robert Enright in Border Crossings magazine in 2018 and Confluence, the exhibition catalogue for Meryl McMaster's solo exhibition curated by Heather Anderson in 2016.  All italics are quotes by the artist, Meryl McMaster.

Although it is interesting to find out about the artist's personal background, it is possible to respond to her images without knowing the back-story.

As Immense As The Sky is a more recent exhibition, (catalogue available)