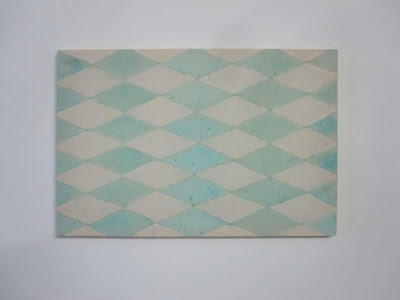 Recent MFA graduate from the School of the Art Institute in Chicago (sculpture, 2016), April Martin is an interdisciplinary artist who works with sun, wind, water, salt, copper and time.  In November and December of 2017 she exhibited in Chicago in two separate exhibitions, and in January 2018, she installed a solo exhibition in Sudbury, northern Ontario Canada.

Above is Blue Print, copper verdigris on stitched muslin
from the exhibition entitled Mounting Tension at ACRE PROJECTS, Chicago. 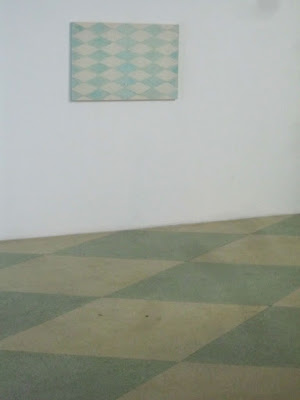 April was inspired to respond to the terrazzo floor in ACRE projects. 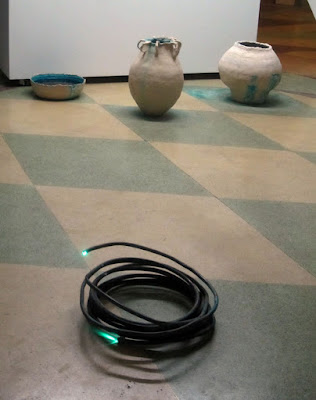 The three vessels above are entitled Like a Lake
bisqued earthware filled with miracle gro and water
and in front of them is
Live Wire
copper, l.e.d.s and lithium batteries 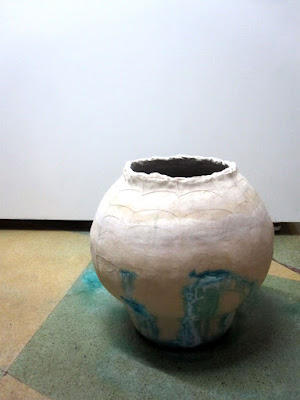 The miracle gro seeps into the body of the vessels and onto the floor so that  Like a Lake becomes a visual example of the effects of time .

Also in Chicago, at Roots and Culture, Martin exhibited three more sculptures and collaborated to make a video with Ruby T.

In this constructed  textile the artist used a code to record the variety of beds that she slept in during 2017, when she took part in five separate month-long residencies in the USA and Europe. 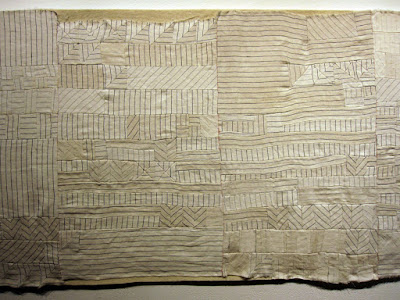 The striped fabric was cut, flipped, angled, and pieced back together in a variety of ways to represent the people with whom, and the places where, she was tucked in.

A line from The Waves (above)
copper and ladder tape
A slightly narrower (and shinier) variation on the copper blind sculpture that April created for her MFA in 2016. (here), it is remarkably affected by the slightest change of light and air movement. 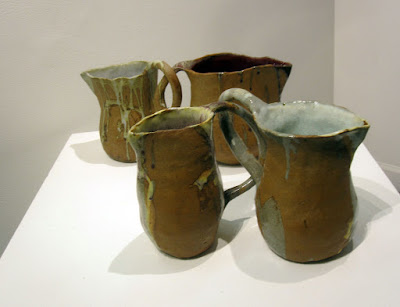 Challenging herself with a nearly impossible kiln firing, these two sets of vessels have inter-laced handles, as if two female friends are arm in arm. 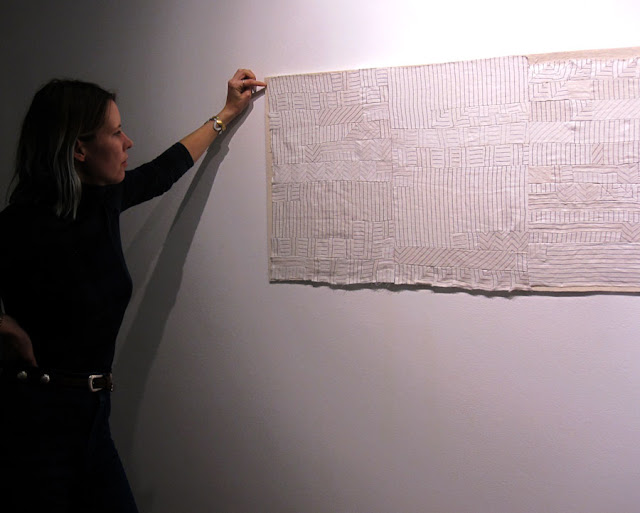 April studied at McGill University (BA 2009) and Concordia (BFA 2014) in Montreal and the third exhibition in this post brings several sculptures inspired by the old factories in that city together with brand-new textile and paper collages that she created at Women's Studio Workshop in upstate New York in 2017.  To construct the factories, the artist made moulds from tin cans, drinking straws and PVC pipe and then cast them with thin clay slip to make components which were assembled into playful sculptures and fired in the kiln. 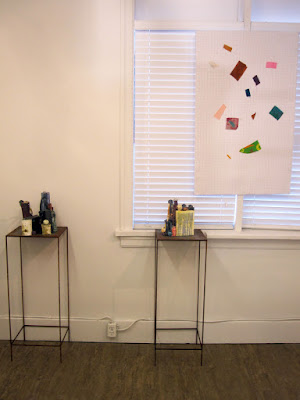 She also constructed custom metal plinths for each of the sculptures.   The twelve sculptures in the exhbition are each untitled, two are shown above with the textile and monoprint collage, Airy.

Also included in this exhibition (entitled Effloresence) are three hand-built sculptures.
Above is Pink Hill., ceramic. 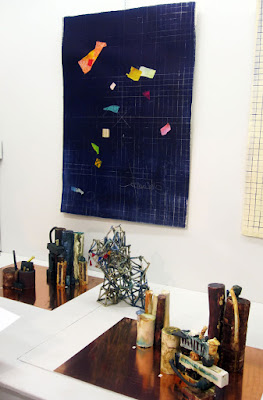 Copper is a constant material in all three of April's exhibitions.  The factory sculptures were glazed with copper oxide (and also cobalt and iron oxides) and some are displayed on sheets of copper.  In the middle of the above photo is Montreal (hand built ceramic) with Windy, mono-print with textile collage above. 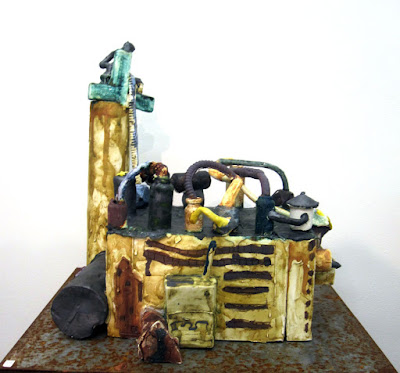 The sculptures were fired twice.  Once for forming the base and then again to fix the oxide glazes.  Martin won an award from Concordia for this body of work. 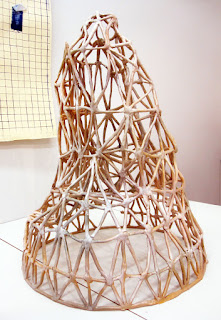 The largest scupture in the exhibition is entitled Royal Mountain, referring to the famous mountain in the city of Montreal, Mount Royal.  Hand built from thin pieces of clay, it was a technical feat to have it succeed in the kiln.  Behind the sculpture is a glimpse of Breezy, a monopint approximately 32" x 40" with textile collage (2017).

April Martin is a sculptor from North Ontario. Her work embraces the scale of shared living, breathing, heating, melting. She holds a BA from McGill University and a BFA from Concordia in Montreal. In 2016 she completed her MFA in Sculpture at The School of the Art Institute of Chicago. She is a recipient of The International Sculpture Centre’s Outstanding Student Achievement in Contemporary Sculpture Award as well as the Legacy Grant from Women’s Studio Workshop (New York). She has installed outdoor works in Humboldt Park (Chicago) and Franconia Sculpture Park (Minnesota). Recently she has participated in residencies at AZ West (California), Teton Art Lab (Wyoming) and Emergency (Switzerland), exhibited work at Roots & Culture (Chicago) and performed at the Walker Art Center (Minneapolis).
(above text from Acre press release)

exhibition with Ruby T.   Moving through walls and Floors at Roots and Culture - Chicago
exhibition with Courtney Mackedanz and Erica Raberg   Mounting Tension at Acre - Chicago
and a solo exhibition    Effloresence at The Northern Artist Gallery - Sudbury

April Martin is our daughter. 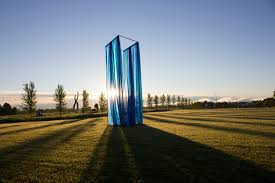 In the spring of 2017, she and Jordan Rosenow collaborated to make this 34 foot sculpture that is installed in Franconia Sculpture park in Minnesota entitled 'we move still.  steel and fabric
Posted by Judy Martin at 9:50 PM 2 comments: