It was extraordinary for a woman from a small town in Japanese hinterland to achieve the degree of artistic attention that Yayoi Kusama had at such a young age.  She described her early, compulsive art making as a refuge from the frought familial relationships she had.  She also said that her art was a retreat from her own psychological symptoms.  For Kusama, productivity is crucial to her mental health.  This post is about her early work made when she was 23 - 30 years old.


"I am pursuing art in order to correct the disability which began in my childhood."  Y.K..
She was born March 22, 1929, the youngest of 4 children.  Her family raised seeds in nurseries, and then on December 7, 1941, when she was 12 years old, the Japanese bombed Pearl Harbour and her country was at war.  She had to go work in a parachute and military uniform factory.

She experimented early with materials and technique and set out to teach herself western style oil painting.
In March 1952, she turned 23, and had her first solo exhibition in her home village of Matsumoto.  It consisted of 250 pieces, and then she mounted a second one 7 months later, also in Matsumuoto.  She was noticed and offered an exhibition in Tokyo.   She had three more exhibitions over the next 13 months in Tokyo. 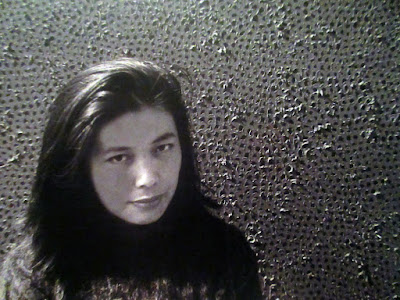 Her face, like Warhol's, is inseparable from her work.
"For art like mine, art that does battle at the border of life and death, questioning what we are and what it means to live and die, Japan is too small, too servile, too feudalistic, too scornful of women.  My art needs a more unlimited freedom and a wider world.  "  Yayoi Kasuma
In 1959 she moved to the USA to escape  the masculine and deeply conservative Japan of the 1950's.  Then in 1973, she went back home.
While in New York City,  (October of 1959) she organized her own solo show at the 10th st co-operative gallery.  It was of her white monochrome canvases, the infinity net paintings.
Before websites.  Before blogs
She did it herself.
She was an avid self-publicists.  A writer of manifestos.
In the early 60's, she covered sofas and chairs with stuffed phallic protuberances.
This re-invention of her art, was unexpected and gained her publicity.
In the 1970's she began to write her autobiography.  She says her work is linked to the hallucinatory episodes from her childhood.  For many critics, her mental health is one of the most fascinating aspects of her career.
In 1993, she represented Japan at the Venice Biennale.
Yayoi Kusama continued to show new work alongside much younger artists in the biennial and triennial circuit international art scene.  She lives in Tokyo today, and has a team of dedicated assistants.   She continues to exhibit to even wider acclaim each year.  Her new installations are based on the Infinity Mirrors that she began making in 1966.

Text in this post is derived from the introduction to the Tate Modern's catalogue for Kusama's 2012 exhibition written by Frances Morris.  The images are also from that book.
Posted by Judy Martin at 9:31 PM No comments: