Berlin artist, Sati Zech makes joyful yet meditative artworks that she calls bollenarbeit that refer, she says, to the hills and low mountains of southern Germany, the region where she was born.
To make them she tears apart sheets of canvas into strips and then reassembles them.  Sometimes they are overlapped, sometimes she uses white archival glue, sometimes plaster or wax or thread to put the pieces together.  The domes and dots of thick red paint are placed in horizontals on the cloth surfaces before or sometimes after this assembling.
In 2006 she had an exhibition of this body of work at the Heidelberger Kunstverein in Germany, and has gone on to show variations on the theme around the world.  Her New York gallery, the Howard Scott has this to say about Sati Zech's bollen paintings.

"The artworks of Sati Zech are unique amalgams of historically ritualistic mark making and 21st century self-expression.  They emanate feelings of femaleness: her power and passion, her cycles and repetitions."
"The layering, gluing, tearing, sewing all give rise to the idea of labour.  Specifically women's labour, a kind of thoughtful, painstaking never-ending work that manifests itself in tactile visions of strength, beauty, necessity, serendipity." 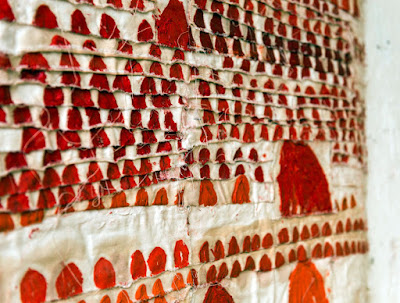 "They contain the emotional dynamism of Louise Bourgois, the semantic materiality of Joseph Beuys, the subtle tactility of Eva Hesse and the symbolic charge of African art."  all quotes from Howard Scott Gallery
Why does this work resonate so much?
Is it the colour?
red .... white
Or the repetition of rounded shape
Or the variety within that repetition
like natural elements - like human figures
Or the emotion expressed with the tearing up of the cloth
and the made elements
the destruction?
Or is it the hand-made de-skilled repairing of that cloth?
Is it because the artist has created a new square
a new human scaled rectangle
fabric that looks to be careless,
but that has taken much thought and care.
much work
There is a feeling of safety in these pieces. 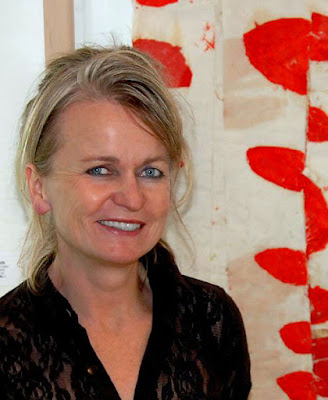 "These works are about communication.  The single bollen are like elements of a piece of music, or flags, or skin that's been branded."  Sati Zech
She is inspired by the large sensual traditional artforms of several African countries.
She is inspired by female sensibility. 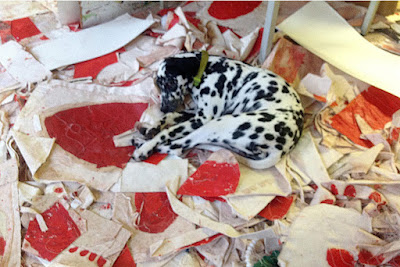 All information is from the internet.  Click here for Howard Scott gallery, here for an image-full Zeit visit with the artist and here for Sati Zech's own website.
Sati Zech speaks about destroying and re-building and about the power and rhythm of communication on this video from Paris.
Posted by Judy Martin at 5:57 PM