"Of late my work has concerned itself with the actions of hand weaving and systematic burning. The process of weaving cloth by hand and then repeatedly burning it is an act of creation juxtaposed with an act of destruction. This sacrifice of cloth woven by my own hands is not a violent act. It is rather a quiet meditation.
The holes are not burned quickly with ravaging flames. Instead each hole is made individually and slowly to create a contemplation of each moment that has been burnt away."  John Paul Morabito
John Paul Morabito turns 30 years in 2012.  He is a MFA candidate (2013)  in fibre and material studies at the school of the art institute of Chicago.

The patterns of dots on the neutrally coloured hand woven grounds are intriguing. On some pieces they seem like a natural kind of dis-colouring, like mold or insect holes.   On other pieces, they are measured and precisely placed.  But however beautiful they are, these marks are definitely not decoration.  There is a depth in this work that hits you in the heart. 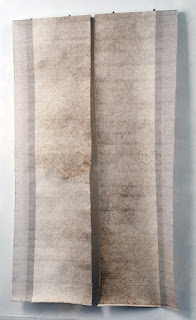 "Perhaps left over from when we first realized our mortality, we have built into us a yearning for all things impermanent. To be human is not only to create but also to destroy. Called Thanatos, the death drive draws us to the end. I find myself in some ways ruled by Thanatos. 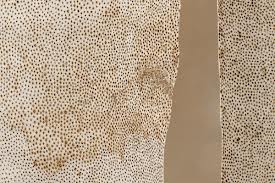 There is a need to make and a need to destroy, neither can be ignored. "     John Paul Morabito
Psychologists tell us that it is all part of the creative process.  It is necessary that we destroy what we have created in order to re-create. This is natural.  Creation and destruction and re-creation.  It is how change happens

But this young man isn't going so far.  He creates in order to destroy and stops there.  He says: " Humanness lies in the failure. The work then becomes a quiescent space of penance and finally acceptance."

It is compelling to think about this.  My body thinks about it.
John Paul Morabito's  work has been part of two most recent fiber art internationals that are held in Pittsburgh every two years.  In one of the final fiberarts magazines (spring 2011) he was featured in the emerging artist showcase. 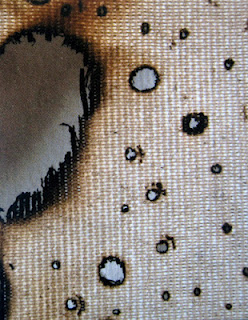 Drawn by the simple beauty of the marks, I respond emotionally to the slow, determined method the artist used to create them, one by one.  It is then that the philosophical ideas inherent in those marks work their way into my head.   It's all about human mortality.  This work is calm acceptance of that undeniable fact.
In After Penelope, the artist deconstructs an industrially woven textile with the idea of reconstructing it.  This is a switch from his earlier burned pieces.  The destruction happens first, then the idea of re-creation.  Is the artist becoming more positive with his meditations?

No.  John Paul Morabito abandoned this project.  See more images on his website.

"I work in repetition. Finding inspiration in the devotional mindsets of religion and masochism I undertake monumental tasks often impossible to complete. Simple, seemingly useless actions are repeated to the point of absurdity and stopped only when the possibility of going on without end is suggested. The work is concerned with the impossibility of eternity."
Posted by Judy Martin at 11:13 PM 6 comments: