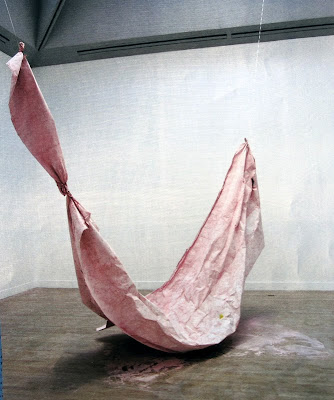 I read Michael Archer's review of Karla Black's Tate Britain exhibition in the March 2008 issue of Art Forum magazine and was intrigued by her absurd materials and new wave feminist viewpoint. The artist says that she does not want her work to be perceived as a formal object because she doesn't want the viewer to objectify the piece. Instead she wants the viewer to encounter the work as they walk past it or as they glance at it. Psychological weight and layers of meaning are not her prime intent.

"Wish List is constructed of sheets of sugar paper held together with hair glue, superglue, and nail polish and then creased, folded, crumpled and twisted into an opulent swag that is suspended from the ceiling hammock like, by two strips or ribbon. Rubbed with chalk dust and plaster, its largely pink surface supports a glop of petroleum jelly coloured with yellow acrylic, and the shredded remains of two household rubber gloves, one pink and the other yellow." 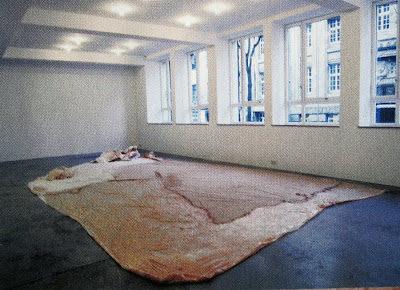 Her pieces might cover large pieces of the floor or hang from the ceiling and in this way they remind us of a range of modernist art such as the dripped paintings of Jackson Pollock, the unusual and fragile materials of Eva Hesse's sculptures and the multi part works of process art.

The nail polish, hair spray, eye shadow and other substances allude not to an obsession with the female body's beauty but appeal more broadly to art's affective power. The decorative qualities, "the illusion and the lies." 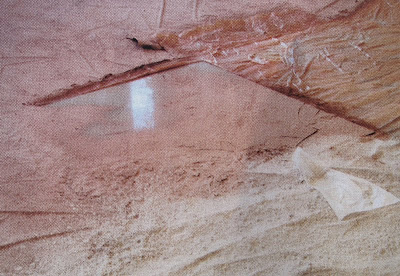 Expressions are hurting, move outside, 2008 detail
"While there are ideas about psychological and emotional developmental processes held within the sculptures I make, the things themselves are actual physical explorations into thinking, feeling, communicating and relating. They are parts of an ongoing learning, or search for understanding, through a material experience that has been prioritised over language" Karla Black 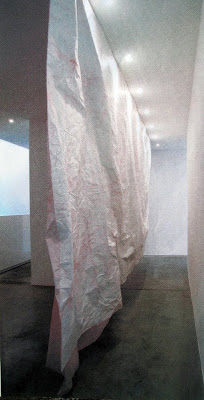 Division Isn't, 2008 paper, paint, chalk, polyethylene, sellotape
Division Isn't is a large sheet of brown paper painted with white acrylic and then stained pink with chalk dust. It developed out of a set of five works titled Opportunities for Girls.
Michael Archer says: "Part of what makes Black's work so compelling is the deft manner in which she accepts the achievements of 1970s feminism while at the same time taunting us, playing to the very stereotypes of male and female activity that feminism so ably deconstructed."

Karla Black lives in Glasgow. There is more about her work and a complete artist statement at Open Frequency
She was recently awarded 15,000 pounds from the Scottish Arts Council.
Posted by Judy Martin at 12:17 AM 1 comment: