Piila Saksela lives in Finland. She is 72 years old now, and has been a maker of textile art all her life. She began her career as a weaver, devoting many years to that craft. She thought that she would weave her entire life but around the age of 50 she became unsatisfied with the restrictions of warp and weft and searched for a new way. She felt fearful of the 'catastrophes that might lie ahead" but after years of searching, through trial and error, she developed a unique new style. 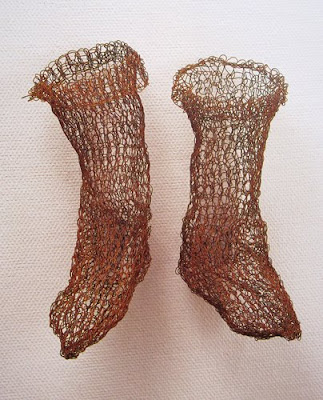 "Bringing one's own studio to life is an arduous task" she says. "It feels as if all originality will flee at any moment."

Her technique involves preparing synthetic silk-like fabrics with oils and lacquers in order to make them translucent. She then layers this prepared fabric on top of tissue paper or newspaper, which then transfer their colours and markings to the fabric. The result is pleated and hand-smocked. 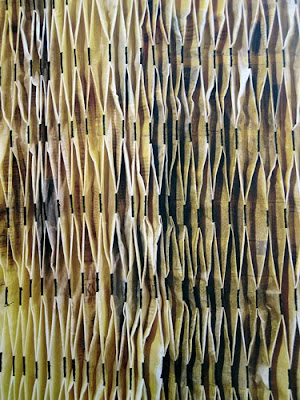 Ninive II (detail) 2002
I love the colour and the little bits of text and image that I glimpse in Piila's work, but more than that, I am comforted and intrigued by the repetition and texture of Piila's hand stitch and manipulation. Smocking is an age-old technique that crosses many cultures and perhaps this is what gives it such power. ( Piila says that the technique is from Hungarian national dress, but my Canadian mother (half English, half Irish) smocked dresses for me.) 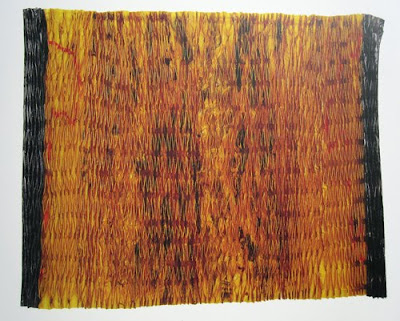 Piila Saksela has done something rare. She has succeeded in making a domestic technique leap into the fine art world. I found all these images as well as a very small amount of Pilla's statement in Art Textiles of the World Scandinavia published by Telos Art Publishing. 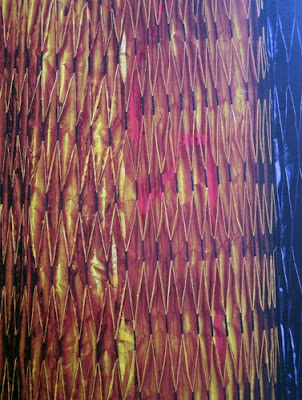 Land Ahead (detail)
Matthew Koumis says about Piila Saksela "Her hangings recall a Japanese aesthetic, and convey both her desire to harness light and to express 'fortuity' allowing of happy accidents in the creative process." 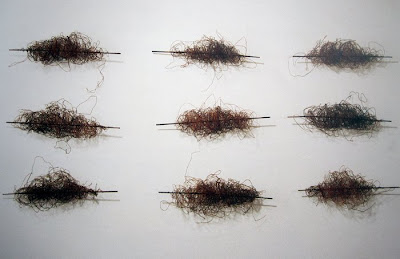 Circling 2001 wrapped steel, rust, wood
I find it so unfortunate that artists of Piila's generation slip away from our web-based research. If her work was not brought to my attention by the Telos series, I would not have known about it. I could not access any images of this artist's work in the "new museum of cyber space". (which is where students today go first when they look for role models) Part of the reason I am writing this blog is to try to give women textile artists who came of age and did most of their work before the internet revolution some deserved attention.
Posted by Judy Martin at 12:38 PM 3 comments: