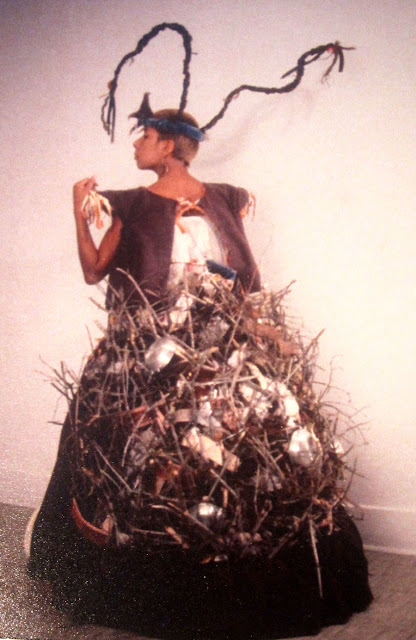 Rebecca Belmore was the first indiginous woman to represent Canada at the Venice Biennale, 2005.

She creates performances that address memory, photographs that implicate the body and sculptures that evoke a sense of place.  Rebecca asks us to examine our relationship to history.  She uses natural materials, repetitive gestures and labour.  She references the struggling or missing body.

This post is about some of the artifacts that Belmore created between 1987 - 2004.
Her earliest piece,  a Victorian dress with a beaver dam bustle, was worn during a performance in Thunder Bay,Ontario Canada and is now part of the Art Gallery of Ontario permanent collection.,
It is a provocation.
Seven years later, at the age of 33, she gathered spruce roots from logging sites, lichen from trees and laced them together to construct a monumental sculpture.  This piece represents a specific place.
Sioux Lookout, Northern Ontario.
.
Wana-na-wang-ong means curve in the land or gentle dip.

"it is crucial that we speak about our connection to the land. "
Rebecca
Belmore
The next year, in 1994, untitled (a blanket for Sarah) was created by pushing 800,000 pine needles through a metal mesh.  (Sarah is the name of a homeless woman who froze to death on the streets of Sioux Lookout). The artist and several assistants created this metaphor for the severity and beauty of nature over days of repetitive labour.
Robert Houle wrote an essay about Rebecca Belmore for the Vancouver Art Gallery 2008 exhibition catalogue.  It is entitled  Interiority as Allegory

He states that Rebecca Belmore's body of work is between two cultures, between order and chaos and between corporeal and visceral.  He says that her performances and installations are impossible to categorize and that the complex emotional resonance and diversity in her work is a powerful allegory for her inner self and also for all of us.
In 1996 (age 36) she created Temple.  Plastic milk bags filled with water from Lake Ontario bring the viewer face to face with the utter simplicity of water, its illness and fragility revealed through the many different colours of liquid - green, purple, reddish brown.

How removed are we from acknowledging that we are part of nature?  How great is that distance?  Rebecca Belmore


In Black Cloud dozens of nails were driven into a blackened, gnarled piece of wood that looks like a broken spine, a metaphor for human and environmental suffering.  She  was 41 when she made it.
In 2002, she covered an upside down canoe with an immense sheet of dark blue fabric, overturning a sign from both Aboriginal and European cultures.  It's as if she is asking, Don't you see?  Both of our cultures are in peril.
In 2003 and 2004, she produced photographs of figures wrapped in cloth.  Fabric binds the body, restricting movement.   The photographs are beautiful, their subject disturbing.
It is the minimalist yet emotional beauty of these photos that hits our hearts.
Rebecca remains unequivacally Anishinabe.  She brings the outdoors into the gallery so that nature is not separated from culture, and culture is not reduced to ethnicity.

All images and the ground of ideas for this text are taken from the Vancouver Art Gallery catalogue entitled Rebecca Belmore.  Much appreciaton and thanks to the curators Diana Augatis and Kathleen Ritter and to the artist.
Posted by Judy Martin at 11:30 AM