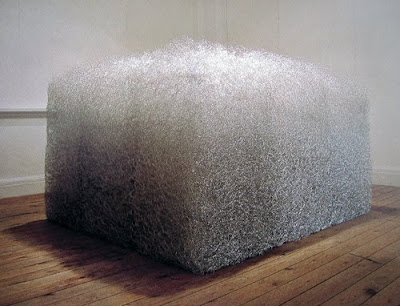 Some moments in nature happen so quickly and then they are gone. The rush, harmony and togetherness of a moving flock of birds is one example, so emotional and uplifting to watch. Another such sight is when wind pushes grasses over and over as it ripples a field, making the air otherwise invisible, visible. These kinds of things, common in nature, are nearly impossible to capture in a painting or a photo, but we remember them forever.
Kyoko Kumai (born 1943) says that she remembers these kinds of things with “memories in my cells that have four billion years.”

There are things that we are consciously influenced by and others that we are unconsciously aware of. The interconnectedness between the land, the air, and humanity is one of the latter. 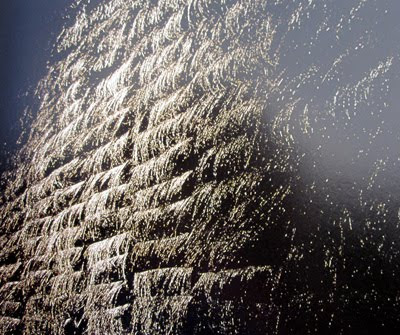 It is her attempt to bring forth that unconscious memory without regard to academic theory or traditional materials that is so astounding. Her quest for whatever technique or material that might work led Kyoko Kumai to eventually find a way through trial and error. Although she had studied weaving she needed to develop her own technique of interlacing and knotting the steel filament. The natural effects of gravity had to be overcome.

She was able to eventually succeed in the late 80’s and has continued honing her own technique of making visible what is invisible. Such works then achieve a powerful connection with the viewer’s invisible inner self. 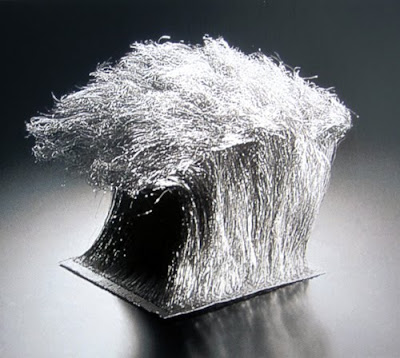 "I have been making things that I myself hope to see, and have never seen before”

The use of stainless steel filament, a comparatively new man made material to create her representations of wind blowing over grass is innovative and practical. Her work can cover a floor in a gallery, be spread outside in the courtyard or be contained, bunched up and draped over walls in a relatively small space. Embedded in all her work are the repetitive physical body movements that she must make over and over during a long period of time.
Although the employment of an industrial material to represent nature is ironic, she does not use it for that reason. Her purpose is more representational. For example, in blowing in the wind (1988) the viewer is able to experience a gust of wind blowing over a huge field and the fact that the grass is actually stainless steel filament does not matter. This small chunk of represented grass and earth seems to go on forever in the viewer’s imagination, because we recall it. We recognize it and can imagine a kind of infinity in the repeated, narrow organic and tactile shapes. We recognize and we imagine because of her hours of repeated activity. 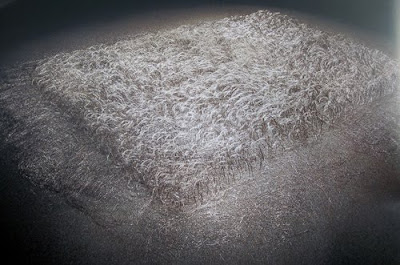 the wind blowing over the grass 1999, stainless steel filament


Egg shaped and circular forms from wrappings of stainless steel filament are another direction for Kyoko Kumai. Displayed piled up into tower forms, or stuffed into small rooms, they bring to mind the crush of humanity that must be part of the artist’s experience in over populated Japan. 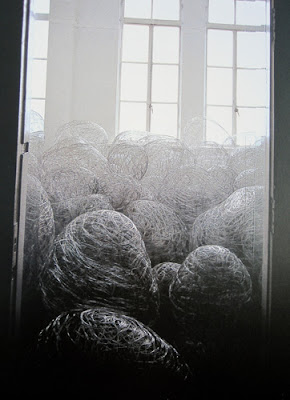 Her work enables the wonder and awe that one experiences occasionally in nature. We recall moments glimpsed from train or car windows. Things become visible that are usually invisible. Kyoko Kumai’s use of stainless steel filament to depict the grasses found in nature is an example of how her intuitive approach led her practice. Although the employment of an industrial material to represent nature is ironic, in blowing in the wind (1988) the viewer is able to experience a gust of wind blowing over a huge field and the fact that the grass is actually stainless steel filament does not matter. It is the small differences in each detail that, we can see that these grasses go beyond the chunk of detail Kyoko has given us – it’s infinite the grass. We recognize and we imagine because of her unendable activity. 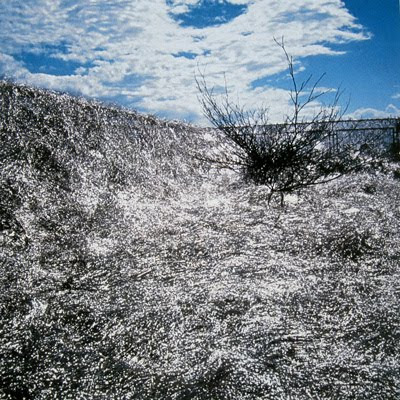 The quintessential way that Japanese artists work is intuitively rather than intellectually. Academics in the UK were startled out of their preferred theoretical approach when Kyoko Kumai exhibited in Textural Space, a show that toured Britain in 2001.

“Pattern, colour, form as well as monumentality and lightness are all derived from the patient and repetitive manipulation of stainless steel filament. While the economy and approach suggests a minimalist approach it belies a lingering emotional charge.” Martina Murgetts


She enables the wonder and awe that one experiences occasionally in nature. We recall moments glimpsed from train or car windows. Things become visible that are usually invisible.

Her work connects with her viewer’s deep memory and gives it back to that individual. Her work sets the mind free.

All images are from Telos Art Publishing's book Art Textiles of the World Japan 2.
The text is from my 2010 dissertation for JC Textile Arts - The Immensity Within Ourselves.
Posted by Judy Martin at 6:48 AM