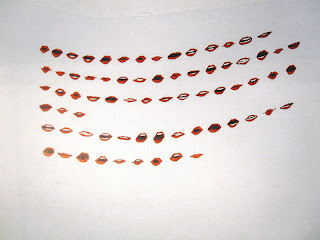 O Canada Animation (1970)
The 71 mouths forming the words to the national anthem are embroidered in red lips and white teeth on cotton.

In 1987 Joyce Wieland, one of Canada's most beloved artists, was given a retrospective at the Art Gallery of Ontario, the first for a living woman artist. The images in this post are taken from the catalogue for that exhibition.

Lucy Lippard's catalogue essay states: "Joyce Wieland is a wild card that saves the contemporary art world from its straight and narrow conformity to institutionalized ‘wildness’. She moves back and forth between mediums and as well, she has a breadth of content. Her art has been criticized for being awkward, sentimental and naïve. She has always had a centre. Her work unifies a personal, sexual, domestic landscape that has grown to be a transcontinental landscape." 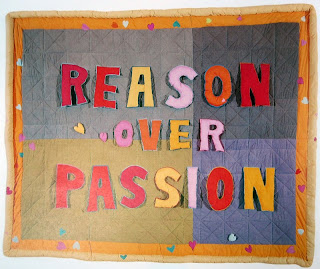 Reason Over Passion, cotton construction, (1968)
Joyce Wielend made this quilt for the prime minister of Canada, Pierre Elliot Trudeau.
Collection of the National Gallery of Canada

Pierre Elliot Trudeau’s confident assertion of the need for government to place reason above passion juxtaposed with the softness of a bed covering (with its connection to the passion of birth, death and love making) makes a thought provoking yet sensual piece of art.

In 1960 she said about the Dada artists. “It’s not just painting, not just art – they’re artistic in a general way. They see things whole. Their jokes are about life." She wanted that same wholeness in her work. 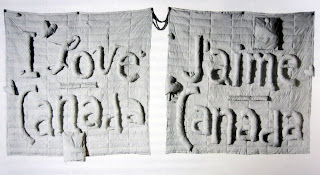 In 1971 she had a retrospective called True Patriot Love at the National Gallery of Canada. She was 40. Joyce Wieland was a born again Canadian and part of the feminist wave. “I think of Canada as female” she said having recently travelled from Toronto to Vancouver and saw a land that 'amazed' her. It was a nationalistic time in a Canada still euphoric from the 1967 centennial.

For "True Patriot Love” Wieland received Canada Council funding to produce new pieces with help from expert craftswomen in knitting, embroidery, rug hooking, and sewing. She wanted to emphasize the collaborative aspect of art and the value of traditional domestic arts. 10 out of 36 pieces in the show were from cloth. “I wanted to elevate and honour craft, I wanted to join women together and make them proud of what they have done”. It was also symbolic of a way that the country might work together. (p.s. Judy Chicago's Dinner Party did not happen until 1979). 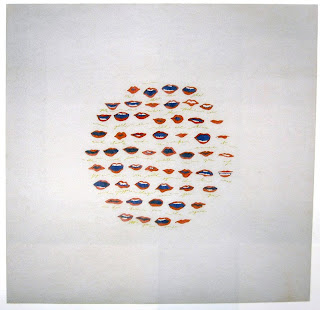 Harold Rosenberg once said that if art went backwards it would become handicraft and if it went forward, it would become media. "She was like Eva Hesse who responded to minimalism in her unique way. Wieland is not a primitive but she is an outsider. She thrives on tension. " writes Lucy Lippard. Joyce Wieland worked with both craft and with new media, she revelled in her femaleness, she was able to combine opposites like earth and spirit, fact and feeling, pain and pleasure.

Her work is intimate because it offers places for the viewer to enter with her/his own associations. She uses words to ‘illustrate’ the visual instead of the other way around. Her speaking mouths are a good example. 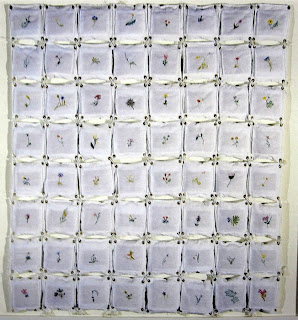 The Water Quilt (1970-71)
Embroidery of arctic wild flowers and sewn plastic construction
Text from James Laxer's book The Energy Poker Game, about the alleged plot by the Americans to take over Canada's water resources.

She said that irony was too frivolous. “We have to get to the very essential thing now, the land, and how we feel about it. It’s important to feel the beauty of everything, to be as positive as possible.’ Joyce Wieland made art for thirty years, and she was always considered eccentric.

Her sister helped her make her quilts. “I cut things out, basted the quilt and my sister completed it.” Wieland wanted to make art that was accessible to everyone, and at the same time invest it with many levels of meaning.”

“I thought that the quilts should be used for special occasions or have a celebratory use – first day of spring and such like. Getting into the making of quilts as woman’s work was a conscious move on my part" Wieland and her husband Michael Snow lived in New York for a period of time. "It was a highly competitive scene with men artists in New York and it polarized my view of life, made me go right into the whole feminist thing.” 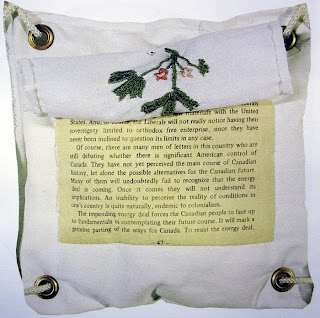 Wieland used quilts because we know and trust them. Quilts mean hearth and home, they keep us warm.

Joyce Wielend was born in 1931 and died in 1998. Several websites promote Joyce Wielend. This one calls her Canada's greatest female artist of the 20th century. There is an excellent biography of the artist on this Canadian government site. In 1983 she was awarded Canada's highest honour, The Order of Canada.
Posted by Judy Martin at 12:39 AM